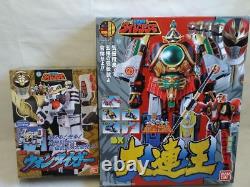 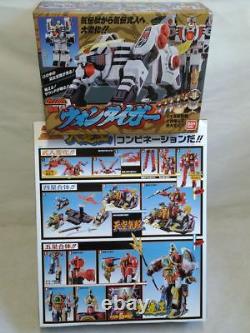 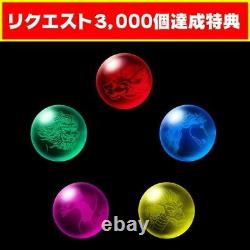 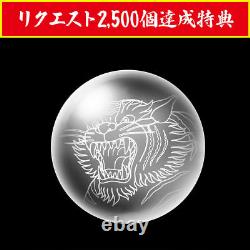 Thank you for visiting my store. I sale a lot of Japanese items. Please check my store listings as well! I use machine translation, so there is some mistakes. If you can not understand, please feel free to ask me.

The lots of 6 jewels(5 &1). Five carious beasts (Kyon Ju) including summoned and used by Direrenger "Ryuusaiou" and "Star Shishi" and the weapons of King Dalian "Great King" Sword and a total of 13 items are set. By uniting five comedians, "Dalian King" of about 34 cm in total height is completed. Of course, "Kobo Beast Long Plan Dynasty" can be transformed into "Kamen Bunjin Lyuusai King". In the commercialization of this time, in the toy released at the time of broadcasting, the part which was reproduced with the sticker was renewed to the painting specification, and detail was added.

Also, in a direction matching the warpage of the sheath that houses the Great King sword, the hole of the fist was changed from the shape that was a regular circle to the shape that fits the finger. And the neck can be rotated left and right, it has become a product that has further improved quality since its release.

Furthermore, by using the surface parts for the deathbed technique Shijo Ver. And the weapon of King Dalian Great King Sword ver. ", An unbeatable mortal work, "Great King Sword, Shippuuden Can be reproduced. Moreover, by replacing the right fist of "Longsung King", the wrist can be rotated, and the weapon "Ryuusyo king" has the weapon "Kyoden Hikyunkin" "Flying Dragon Great Windmill" You can also reproduce "Hiryu nutsu Fuusha". 15 years old and over? 1, Truck for Heaven Air... 1 Daiou Sword Shippuisha ver.

In the request sale of "Five-Star Union DX Dalian King" conducted in May 2017, we achieved 2,500 requests in just one day and 3,000 in 3 days. A gift of "Tianba came from a treasure", a privilege to all request applicants, has been decided. In "DX won tiger", the "Won Tiger" of the beasts (Kyun Jyu) summoned and civilized as a Dangeranger, and transformed into a humanoid Weapon "golden sword" used by "Kamen Takehito (Kintenbu) Wong Tiger", "Caricature Jewel" necessary to activate Special Moves, Items such as figures that can be mounted on the head of a won tiger are set as a set. "DX wong tiger" of this time reprints the part which had been reproduced with a sticker to the painting specification in the toy released at the time of broadcasting. By adding joints, we are now able to faithfully reproduce the form of the running beast "Wong Tiger".

By further adding voice, by pressing the button of the head, it will be called a Special Moonlight Star Wars Rosewalk (running like this), running sound, Deformed sound from air beasts to Kamita Takehito is activated. Moreover, by recording Kiba ranger's BGM (song of wong tiger) You can enjoy deformation scenes with more realistic feeling. Its Special Move also adds light emission from the eyes from what was the only luminescence in the toys at the time of broadcasting. More realistic "Kaime Takehito Wong Tiger" Special Move "Toriko national secretary" became reproducible.

By replacing it with a stigmatic gadgiae from an ordinary guardian with no stamp, You can reproduce seven techniques including "Flame Ball" that appeared in the play. By combining this "Wong Tiger" with Star Temma, Star Kirin, Star Lion, Star Phoenix respectively attached to "DX Dalian King"? It is possible to make it into "Fang Dynasty" where 5 bodies are centered on "Won Tiger" and "coalesced". In addition, a seat that images the background of the scene that invokes the dead end technique is attached. The surface is "Flying sword · tree end dust" of King Fang, The reverse side is Dalian King's "King of the Great Sword" and you can enjoy it more faithfully reproducing the scene in the movie. 7, Buddhism Bao Toroko no Majutsu ver.

We do not mark merchandise values below value or mark items as "gifts" - US and International government regulations prohibit such behavior. This item is in the category "Toys & Hobbies\Action Figures & Accessories\Action Figures".

The seller is "moto_hobby_jp" and is located in this country: JP. This item can be shipped worldwide.